Countries which Fly the A-4 Skyhawk

The A-4 Skyhawk was originally manufactured by McDonnell Douglas.

Books on the A-4 Skyhawk 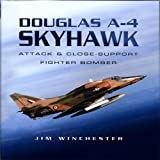 The Skyhawk first entered service with the US Navy almost 50 years ago. (First flew 22 June 1954) It is still in service with various US units and remains the backbone of many of the air forces of those countries to which it has been exported. It was originally conceived as a carrier-borne fighter bomber, but as the aircraft has evolved it has taken on other roles. It is renowned for its strength and survivability in combat.

This is an in-depth look at the design, production, evolution, operation and performance of the aircraft. It will also include firsthand accounts of flying the Skyhawk in action. It is written for those enthusiasts and historians who are seeking the ultimate reference. 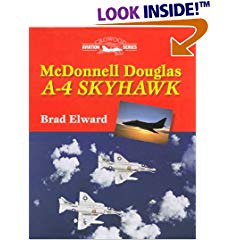 I hope that you will consider A-4 Skyhawk for your collection. This is the most comprehensive book on the market on this wonderful aircraft, and there are many interesting, and some previously unpublished, photos of the Scooter. I have included interviews with pilots who flew the A-4 in Vietnam and have included a discussion of each Skyhawk variant. I know the book is pricey, but if you flew the Skyhawk, this is a must.