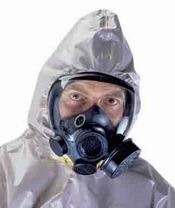 The ABC’s of NBC Warfare Survival

In recent years, growing concern over the likelihood of a terrorist attack involving the use of unconventional weapons, such as biological warfare agents, has increased. The threat is indeed serious, and the potential for devastating numbers of casualties is high. Our health and medical community must be prepared to respond to such an event. To facilitate response planning, the Biological Weapons Improved Response Program (BW IRP) developed a mass casualty care concept called the Neighborhood Emergency Help Center (NEHC). This concept describes the first operational component of a comprehensive health and medical response strategy being developed by the BW IRP.

World Health Organization analysis of the health aspects of the possible hostile use of biological or chemical agents.

On February 16-17, 1999, in Arlington, Virginia, 950 public health officials, physicians, and other medical personnel, along with government, military, and intelligence experts gathered for the first National Symposium on Medical and Public Health Response to Bioterrorism.

Bioterrorism as a Public Health Threat

The threat of bioterrorism, long ignored and denied, has heightened over the past few years. Recent events in Iraq, Japan, and Russia cast an ominous shadow. Two candidate agents are of special concern - smallpox and anthrax. The magnitude of the problems and the gravity of the scenarios associated with release of these organisms have been vividly portrayed by two epidemics of smallpox in Europe during the 1970s and by an accidental release of aerosolized anthrax from a Russian bioweapons facility in 1979. Efforts in the United States to deal with possible incidents involving bioweapons in the civilian sector have only recently begun and have made only limited progress. Only with substantial additional resources at the federal, state, and local levels can a credible and meaningful response be mounted. For longer-term solutions, the medical community must educate both the public and policy makers about bioterrorism and build a global consensus condemning its use.

Reference for Rapid Assessment and Treatment Of Chemical/Biological Agents

Anthrax is an often fatal bacterial infection that occurs when Bacillus anthracis endospores enter the body through abrasions in the skin or by inhalation or ingestion.

Anthrax as a Biological Weapon

Specific consensus recommendations are made regarding the diagnosis of anthrax, indications for vaccination, therapy for those exposed, postexposure prophylaxis, decontamination of the environment, and additional research needs.

Smallpox as a Biological Weapon

Specific recommendations are made regarding smallpox vaccination, therapy, postexposure isolation and infection control, hospital epidemiology and infection control, home care, decontamination of the environment, and additional research needs. In the event of an actual release of smallpox and subsequent epidemic, early detection, isolation of infected individuals, surveillance of contacts, and a focused selective vaccination program will be the essential items of an effective control program.

In March of 1996, Fire Chief Lamont Ewell, who was then the president of the International Association of Fire Chiefs (IAFC), told the U.S. Senate Permanent Subcommittee on Investigations that it would be the responsibility of local firefighting, police and emergency medical units to cope with a terrorist attack that used nuclear, chemical or biological weapons. He also made the startling announcement that Fire/Police/EMS services, collectively, were not prepared for the challenge.

The Public Health Response to Biological and Chemical Terrorism

Anthrax is a serious disease caused by Bacillus anthracis, a bacterium that forms spores. A bacterium is a very small organism made up of one cell. Many bacteria can cause disease. A spore is a cell that is dormant (asleep) but may come to life with the right conditions.

Smallpox is a serious, contagious, and sometimes fatal infectious disease. There is no specific treatment for smallpox disease, and the only prevention is vaccination. The name smallpox is derived from the Latin word for “spotted” and refers to the raised bumps that appear on the face and body of an infected person.

Two experts who served as U.N. arms inspectors in Iraq examine the threat of biological terrorism

A report on the biological weapons threat and how the Soviet Union secretly amassed an arsenal of bio-weapons.

The American Biological Safety Association (ABSA) was founded in 1984 to promote biosafety as a scientific discipline and serve the growing needs of biosafety professionals throughout the world. Its goals are to provide a professional association that represents the interests and needs of practitioners of biological safety, and to provide a forum for the continued and timely exchange of biosafety in formation.

The Center for Biosecurity of the University of Pittsburgh Medical Center (UPMC) works to prevent the development and use of biological weapons, to catalyze advances in science and governance that diminish the power of biological weapons as agents of mass lethality, and to lessen the human suffering that would result if prevention fails.

How Biological and Chemical Warfare Works

In this edition of HowStuffWorks, you will learn how chemical and biological weapons really work, how they might be deployed and what the actual threats are.

The threat of anthrax as a biological weapon has become a real concern for everyone. Anthrax is a disease caused not by a virus, but rather by bacteria. There aren’t any known cases of anthrax passing from one person to another, so it is considered to be noncontagious. It is still a large threat, however, because if it isn’t recognized and treated quickly enough it can be deadly. Bacillus anthracis is the bacterium that causes the disease anthrax. It has historically affected herbivores like cattle, sheep or other grazing herds, but has also been a threat to humans who work with these animals and their by-products.

Because of all of the news about Anthrax recently, the drug Cipro is being discussed daily. Cipro, the Bayer brand name for the drug ciprofloxacin, is one of the antibiotics that is effective against the anthrax bacteria.

A primary value of the Textbook of Military Medicine series is to preserve the lessons of past wars and, by so doing, demonstrate how current doctrine is built on knowledge that was gained at so high a cost. Medical officers should read this volume, Medical Aspects of Chemical and Biological Warfare, and learn its lessons well. Civilians expect that we in the military will know how to manage chemical and biological casualties. Indeed, if we do not, then who will? The nation expects us to be prepared to defend against all attacks and will be unforgiving of any incapacity on our part.

It was a horrible accident — for the people who died and for what it revealed. It would show the world the effects of anthrax on a civilian population, and it would expose the existence of a massive biological weapons program in the former Soviet Union; a program, some fear, exists to this day.

Health Service Support in a Nuclear, Biological, and Chemical Environment

As the Department of Defense’s lead laboratory for medical aspects of biological warfare defense, USAMRIID conducts research to develop vaccines, drugs and diagnostics for laboratory and field use. In addition to developing medical countermeasures, USAMRIID formulates strategies, information, procedures, and training programs for medical defense against biological threats.

The JPEO-CBD vision is to eliminate the biological warfare (BW) threat by protecting the warfighter and other users. The JPEO-CBD provides biological warfare protection by rapidly developing, acquiring, and fielding the most effective biological detection, and BD vaccines and medical diagnostic equipment within cost, schedule, performance and logistical parameters.

Bringing the CB Defense and Homeland Security Communities Together

The Defense Threat Reduction Agency safeguards America’s interests from weapons of mass destruction (chemical, biological, radiological, nuclear and high explosives) by controlling and reducing the threat and providing quality tools and services for the warfighter.