The threat of global thermo nuclear war is much less than it was during the nuclear arms race and the cold war with the Soviet Union.

The most likely scenario for nuclear war now involves a terrorist group obtaining a nuclear capability and using it to further their political or religious agenda.

Another possible scenario is the use of a low-yield nuclear weapon to punish a rogue nation that is discovered to be behind a particularly damaging terrorist attack.

If New York City disappears one afternoon, the homeland of the perpetrators may very well disappear shortly therafter.

The good news is that most of the current scenarious for nuclear war involve the (relatively) small scale usage of these weapons of mass destruction. This means that the effects of modern nuclear war are more survivable than the potential nuclear wars of recent history. This also puts a new focus on nuclear war survival skills.

The History of Nuclear War

Documentation and Diagrams of the Atomic Bomb

The story of the atom bomb

The Manhattan Project and the Atom Bomb

The story of The Manhattan Project and the Atom Bomb

Nuclear Weapons and the Development of Nuclear Warfare

How does a nuclear bomb work?

Introductory level answer on the internal operations of nuclear bombs.

What are the types of nuclear fuel?

Explanation of the various types of fuel used in nuclear reactions.

A nuclear weapon is a device in which most or all of the explosive energy is derived from either fission, fusion, or a combination of the two nuclear processes. Nuclear fission is the splitting of the nucleus of an atom into two (or more) parts. Highly enriched uranium and plutonium, when bombarded by neutrons, will release energy and emit additional neutrons while splitting into lighter atoms. In nuclear fusion, light isotopes of hydrogen, usually deuterium and tritium, join at high temperatures and similarly liberate energy and neutrons.

The ABC’s of NBC War Survival

What is radiation sickness?

Health Protection Guidance in the Event of a Nuclear Weapons Explosion.

Recently there have been increased concerns about the development and possible use of nuclear weapons by certain countries or by terrorists. This document provides advice to the general public on how best to act to minimize any health consequences in the event of a nuclear weapon explosion or if such an event is anticipated.

Health Service Support in a Nuclear, Biological, and Chemical Environment

The effects of nuclear weapons

From PBS: The American Experience

A Guide to Nuclear Weapons

The possibility that terrorists could acquire a nuclear weapon and explode it in a U.S. city is real. This would be a more difficult feat than chemical or biological terrorism, but the massive, assured, instantaneous, and comprehensive destruction of life and property that would result may make this a priority for terrorists. While efforts to reduce the chances of this happening have been underway since long before last September 11 - and have recently been bolstered in some respects - the size and the speed of the U.S. and international response is not yet remotely commensurate with the magnitude of the threat. This report briefly reviews the dimensions of the danger and the efforts now underway to combat it, and then recommends seven sets of actions that ought to be undertaken immediately to bolster the barriers against this horrifying threat.

After almost ten years of cooperative effort with the United States and other countries, the situation in the Newly Independent States continues to pose serious proliferation challenges.

This DVD is a collection of archival films related to nuclear proliferation and arms control. There is footage of nuclear test explosions, President Eisenhower’s and President Kennedy’s pursuit of a nuclear test ban treaty, Atoms for Peace, civil defense drills for nuclear attack, and speeches related to nuclear arms control efforts. A main menu allows you to choose which historical films to view.

Trinity and Beyond, Nukes in Space: Rainbow Bombs, and Atomic Journeys: Welcome to Ground Zero

Trinity and Beyond: The Atomic Bomb Movie

In the salad days of nuclear-weapons testing, the United States detonated 331 atomic, hydrogen, and thermonuclear bombs. Many of those explosions appear in Trinity and Beyond, which utilizes a lot of declassified footage, most of it in color. Standouts include the United States’ South Pacific detonation of an atom bomb 90 feet below the water to study the effects on a fleet of ships. Surprise, surprise, they sink! If that wasn’t enough, the navy also loaded the decks with sheep to study the effects of the blast on life forms. Surprise, surprise, they die! Glowing leg of lamb anyone? This film will alternately amuse and horrify you at the rampant irresponsibility of the Soviets and Americans in their quest for nuclear domination. The Russians have the honor of having detonated the largest nuclear bomb ever at a whopping 58 megatons. The Hiroshima bomb was barely a kiloton. Of course, after the U.S. and Russia ceased their activities, the Chinese decided to get in on the act. But that’s a different story for a different documentary. 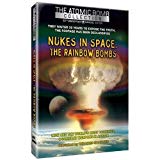 Boasting material that was recently declassified, this documentary presents some startling material about how the United States detonated a number of atomic bombs in space during a top-secret cold war weapons program. The history of military rockets is detailed, beginning with the Nazi V2 rockets that attacked England late in World War II. The problems encountered in the America’s cold war rocketry program is dramatically illustrated with a film montage of U.S. missiles spectacularly blowing up on their launch pads. After the Soviets launched Sputnik, America’s resolve to be able to wage war in space stiffened, and test detonations of atomic weapons in space began. The effects of these little-known tests were bizarre and included electromagnetic disturbances that blew fuses in Hawaii while creating beautiful, if dangerous, artificial auroras that gave the tests the nickname of the “Rainbow Bombs.” Of particular interest in this documentary are tapes of White House meetings at which President John F. Kennedy and his top science and military advisers discussed the atomic tests in space. The bomb detonations caused radiation problems in space, damaging fledgling communications satellites, and the government eventually called an end to the program. This is an entertaining and very informative look at a piece of cold war history that seems like vintage science fiction, yet it’s all real.

Our atomic heritage resides in sites all over the country-from the Trinity test area to natural-gas wells in Colorado-and many of them are open to the public. Plan your vacation with Atomic Journeys: Welcome to Ground Zero, a blast through memory lane narrated by the perfectly suited William Shatner. Never-before-seen footage of test explosions and top-secret and work labs explores the history of America’s nuclear programs, and interviews with current and former atomic scientists and engineers give depth to sights such as “the most bombed place on Earth” in Nevada. Learn about nonmilitary uses of nuclear weapons, the rationales behind the different programs, and where you can find these strange places. The musical score is a special bonus, performed by the Moscow Symphony Orchestra in a goodwill gesture of post-cold-war cooperation.

The Day After Trinity

The Day After Trinity is a haunting journey through the dawn of the nuclear age, an incisive history of humanity’s most dubious achievement and the man behind it-J. Robert Oppenheimer, the principal architect of the atomic bomb. Featuring archival footage and commentary from scientists and soldiers directly involved with the Manhattan Project, this gripping film is a fascinating look at the scope and power of the Nuclear Age.