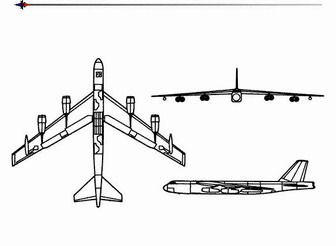 Countries which Fly the B-52

Stratofortress: The Story of the B-52

Boeing’s mighty B-52 Stratofortress has seen continuous operational service with the United States Air Force since the type was introduced in 1957. The aircraft has been upgraded several times and has assumed many different new roles since it was originally conceived and then provided the key airborne platform for America’s strategic nuclear force. It is predicted that it will serve as a front-line aircraft until 2040. Apart from the formidable threat it provided during the long years of the ‘Cold War’, the aircraft has played a significant part in all US overseas operations since Vietnam. The more recent include Desert Storm in 1991, the Balkan conflict, Afghanistan and the liberation of Iraq. Over 700 were built and around 80 remain in service. This book includes chapters on Concept Requirement, Design and Development, Production, Evolution and Variant Models, Operational Tasking, Operational History (with first-hand accounts from crews), Weapons and Equipment Carried, Flying the Aircraft and Current Service Operations.

Boeing’s mighty B-52 is undoubtedly the most famous jet bomber ever built, having served now for almost 40 years. The last in the line of Boeing �’heavies�’, the Stratofortress has gone on to break all records for longevity, firstly with Strategic Air Command, and more recently with Air Combat Command.

Discusses history of the B-52 Stratofortress warplane and its use in the military campaigns in Afghanistan after the September 11, 2001, terrorist attacks.

With the ending of the Cold War, the B-52’s traditional combat role became redundant, and the USAF looked for new ways to use the machine. The invasion of Kuwait by Iraq in August 1990 gave the B-52 the chance to prove its worth in the new world order, and Stratofortress crews flying the B-52G seized the opportunity with both hands. This book explains how, flying from bases in the Indian Ocean, Britain, Spain and Saudi Arabia, the B-52G was at the forefront of the campaign to free Kuwait of Saddam’s forces and dropped the first bombs of Operation Desert Storm.

Designed to form the backbone of Strategic Air Command’s nuclear deterrent, the B-52 force was brought to higher states of readiness whenever crisis threatened the USA, most notably when Kennedy and Khruschev went eyeball-to-eyeball over Cuba. Soon afterwards, B-52s formed the backbone of the USAF’s bombing campaign in Vietnam, Cambodia and Laos. This book follows the story of the B-52 from its genesis to its first combat missions in June 1965 and through to the briefly sustained but bloodily fought Linebacker II offensive in late 1972. Even after the withdrawal of US forces in 1973, B-52s remained in-theatre, flying training missions mainly from Guam.

The United States Air Force is the only Air Force in the world with the ability to project power rapidly, precisely, and globally using strategic bombers. With their global range, large payloads and immediate response capability, Air Combat Command’s (ACC’s) heavy bombers, the B-52H, B-1B, and B-2A are at the core of the USAF’s war fighting strategy and provide both nuclear and conventional deterrent options for the United States. Don Logan’s eighth book for Schiffer Publishing Ltd. presents a roll call of ACC’s bombers with photographs and history of all 208 bombers since joining ACC in June 1992. Also included are all of the bomber’s weapons including gravity weapons, and special weapons such as AGM-84 Harpoon, AGM-86 ALCM/CALCM, AGM-129 ACM, AGM-142 Have Nap, AGM-154 JSOW, and AGM-158 JASSM. This book has over 700 color photographs, 40 line drawings, and 80 unit and special purpose flight suit patches. Over 780 color photographs and 40 line drawings.