Countries which Fly the Tu-95 Bear

The beginning of the Cold War and the perceived need by Soviet political and military leaders to deliver nuclear strikes against the continental USA led the Soviet Union to develop new delivery vehicles — primarily strategic bombers. Thus, in 1951 the Tupolev Design Bureau brought out the Tu-95. Known to the West as the Bear, this machine was unique in that it combined turboprop engines with swept wings — a feature which accounted for the bomber’s impressive top speed of 910 km/h. The basic bomber soon became a symbol of the Soviet threat and the progenitor of a whole family of combat aircraft which included missile carriers, an over-the-horizon targeting version working with missile submarines, reconnaissance versions, a long-range ocean anti-submarine warfare aircraftwhich was sufficiently different to receive a separate designation (Tu-142), a communications relay version, and assorted test beds. The Tu-95 also served as the basis for the impressive Tu-114 long-haul airliner. Some of the Bear’s versions remain in service to this day. This book contains approximately 200 black-and-white photos illustrating the type’s development and service from inception to the present day. Photos include detailed captions. 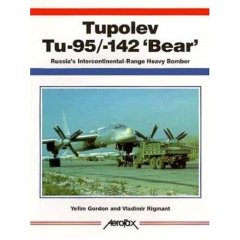 This book delineates the modifications and additions that differentiate the two versions of this bomber that at first glance seem identical. Many detail drawings of cockpits, engines, under-carriages, weapons bays, and more reveal these differences in great detail, providing an in-depth view of this renowned bomber.